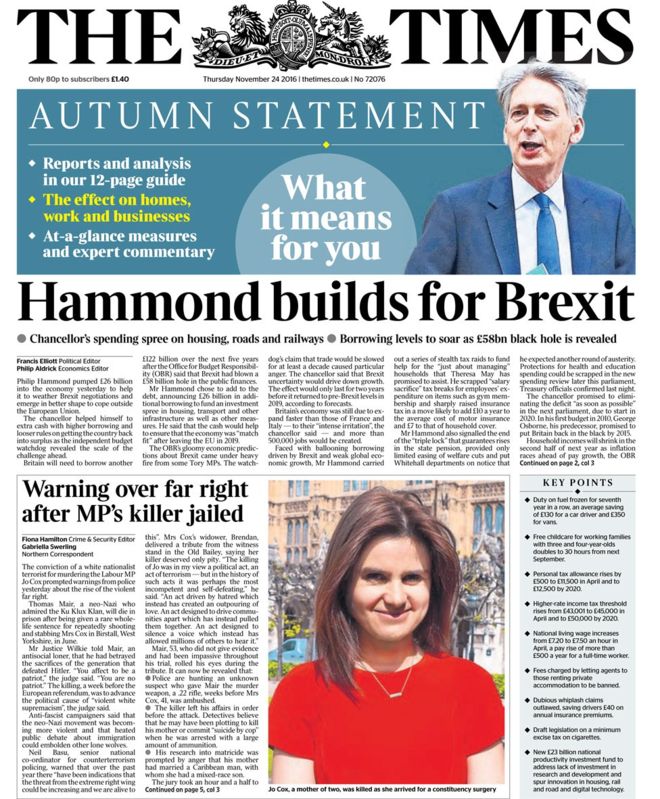 Philip Hammond “builds for Brexit” with a £27bn “shock absorber”, but the papers also raised major concerns about higher borrowing.

The Financial Times stated that the chancellor created a £27bn fiscal “shock absorber”, in terms of investment to protect the economy against Brexit uncertainty. It also pointed out the borrowing over the next five years was going to be “about £122bn more than expected”, and that the reference to “just about managing” (JAMS) may apply to the entire economy.

The headline used by The Times, “Hammond builds for Brexit”, showed the key issue that Hammond needed to address, namely to “help weather Brexit negotiations” and emerge in a “better shape to cope outside the EU”. The paper also mentioned that the chancellor will use higher borrowing in an “investment spree” and looser rules to get the country back into surplus, as Brexit has already blown a £58bn “hole” in public finances.

According to The Guardian, even though cautioning that economic forecasting was not an exact science, Hammond said the Treasury was preparing for “very challenging fiscal circumstances”. The paper explained how a weaker economy, and not just the Brexit vote, had hit the Exchequer hard.

“With the Treasury now expecting public finances to be deep in the red until the next parliament, Hammond repeatedly used the mantra of ‘building an economy that works for everyone’,” said The Guardian.

The Daily Telegraph said that Hammond denies that the borrowing is “out of control”. Additionally, the paper flagged up the Office for Budget Responsibility’s (OBR) warning that the Treasury would not balance the books, which caused an attack by “Eurosceptic” ministers. The chancellor’s statement was “one of the most conservative” in recent history, it said, with minimal changes to tax and spending policies, he has “missed an opportunity to join some of the dots” about the future.

“Hammond was alert to the importance of sending out a positive message – of a ‘Britain open for business’ and able to control its own destiny,” said The Telegraph.

and, pictured the chancellor, grinning.

Overall, the papers had the same general view that although Hammond wanted to show that we will be prepared for economic uncertainty regarding Brexit, financial issues are a serious concern. Many have pointed out the increased borrowing to invest in infrastructure, research and development may become very “challenging” to recover from and it is debatable whether or not it will benefit the economy.

This will be, surprisingly, the last Autumn Statement, with a declaration of building an economy that “works for everyone” and “building for Brexit” the nation has their fingers crossed that the economy will pull through Brexit, without a devastating bill.

Photo and article credits to AccountancyAge

© 2021 Bains Watts. | Bains Watts & Co. Ltd are Brokers acting for both the seller and the buyer

Any cookies that may not be particularly necessary for the website to function and is used specifically to collect user personal data via analytics, ads, other embedded contents are termed as non-necessary cookies. It is mandatory to procure user consent prior to running these cookies on your website.